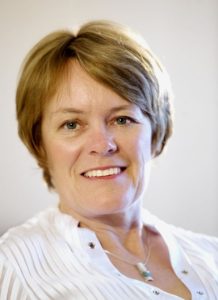 The win was announced at an online event attended by all the shortlisted authors, Mirranda Burton, Lorraine Marwood, Katrina Nannestad and Wendy Orr, and three of the judges, Margaret McKay-Lowndes, Mia Macrossan, and Zewlan Moor. 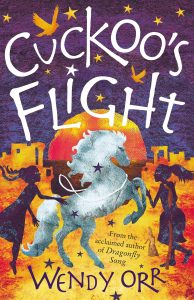 This gripping novel experiments with poetic form to convey the emotion of living as a disabled girl in Bronze Age Crete. The poetry and extensive research do not get in the way of a cracking good story. The reader is drawn into a suspenseful, high-stakes adventure as Clio battles to save her village from invaders and prove the worth of her beloved horses.

Cuckoo’s Flight is remarkable for a its blend of nuanced prose and taut verse which tells a memorable story that immediately engages the reader, and brings into close focus a world vastly different from our own, but one that highlights our common core values as humans.

Read our interview with Wendy Orr

The results are in. Here, in alphabetical order, are the four shortlisted titles for this year’s  Book Links Award for Children’s Historical Fiction. 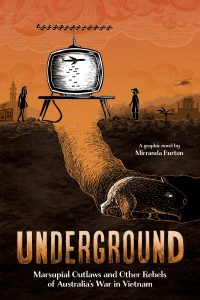 Judges’ comments: This carefully researched and ambitious graphic novel reveals all the drama and conflict of Australia’s involvement in the Vietnam War where civil conflict, racism and division are part of a long legacy of colonialism. It’s a complex tale, spanning decades, countries, politics, the arts, beliefs and truths. It’s also a tale told with skill through text and illustration, which makes recent history accessible for a broad audience. 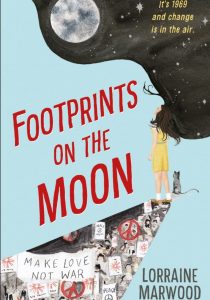 Footprints on the Moon by Lorraine Marwood

Judges’ comments: Lorraine Marwood has cleverly woven together several recognisable themes important to children with the historical events of the late 1960s. The Moon Landing, the Cold War, the Vietnam War and the associated civil unrest are mirrored in the relationships which wax and wane as the story unfolds. Just as man leaves a footprint on the moon, the teens consider what footprint they will leave for future generations. Sharnie experiences a ‘cold war’ with her sister and her best friend as they are growing up and becoming increasingly distant.  There are many contrasts and parallels to explore and digest in this engaging story, which is presented in a pleasingly succinct, lyrical style. 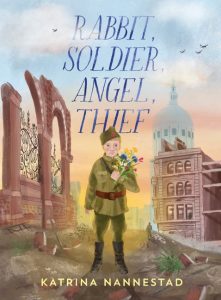 Judges’ comments: In this ever-topical story, inspired by real events during World War 2, of a boy caught up in a cruel war Katrina does not shirk the serious issues but presents them in ways accessible to young readers. Carefully structured and sensitively written this novel creates a space that celebrates timeless values of family, friendship and belonging amidst shocking violence.

Judges’ comments: This gripping novel experiments with poetic form to convey the emotion of living as a disabled girl in Bronze Age Crete. The poetry and extensive research do not get in the way of a cracking good story. The reader is drawn into a suspenseful, high-stakes adventure as Clio battles to save her village from invaders and prove the worth of her beloved horses.

Book Links is proud to announce the 2022 Longlist for the annual Book Links Award for Children’s Historical Fiction. Eight stories from Australia have been chosen from  more than thirty entries for the award. Entries included picture books, middle grade novels and stories for older readers. Here are eight titles that excel at developing an understanding and appreciation of history in children. Congratulations to everyone on the 2022 long list!

Asiya loves to go to Nanu’s house where she explores the big old chest filled with quilts that tell the stories of the women in Asyia’s family and the history of her people.

Told in alternating chapters by Cat and Fanny this time engaging slip/body swap novel explores the challenges facing young girls today and in the past.

Footprints on the Moon by Lorraine Marwood, University of Queensland Press, 2021.

A verse novel set in 1969,  just before the moon landing and during the time of protests about conscription and Australia’s involvement in the Vietnam war.  Sharnie, a young girl mainly concerned with  finding her place in her first year at  high school  gradually becomes involved in the issues of the day.

A moving story about a  little boy’s experiences as a member of the Russian Red Army fighting to survive against the German advance. It was inspired by the story of real boy, Sergey Aleshkov, who was about six when he joined the Red Army.

When Clio’s town in Bronze Age Crete is threatened by seafaring raiders, she faces the greatest sacrifice of all. Can Clio, her herd of horses and a new young friend find a way to change their destinies?

With luscious artwork and a lyrical text in Kriol and English,  Ngukurr artist Karen Rogers evokes the world of her childhood in a remote part of the Northern Territory. Her story shows how culture and history is passed on from generation to generation.

Nine-year-old city newspaper seller Roddy becomes involved in the infamous Battle of Brisbane in 1942: when American and Australian servicemen fought against each other, rioting in the streets of the city for two days.

Congratulations to everyone who made it on to this magnificent long list.

Look out for these dates: